Available from my friend Scott.

It Wouldn’t Surprise Me

in the least if this were legitimate. Goodness knows I’ve met plenty of people whose ability to get out of bed, get dressed and go to work without dying a horrible death surprises the heck out of me. H/T to Peter. 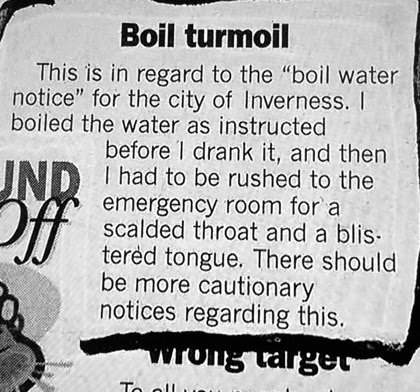 When A Problem Comes Along

It’s All Greek to Me

So one of the things I miss about the Buffalo area is the plethora of Greek diners. The Towne in the heart of Allentown was always a good choice. Pano’s (which was a hole in the wall when I first went there) is another  decent one.

An old girlfriend of mine used to joke that you had to earn Pano’s via a night at the Continental (The Goo Goo Dolls before they were even remotely famous and started to both suck and be obnoxious personally – some of us knew you back when, Johnny), The Jam Club, Nietzche’s, some place over by Chippewa and Washington that closed down whose name I can’t remember but went to a bunch of times and saw some bizarre behavior at  including a My Life With The Thrill Kill Kult show that was…weird.

Christo’s Family Restaurant  in the Falls was a serious dive with great food, and right over near my mechanic. Olympia up on Niagara Falls Blvd. was where we’d go for breakfast on the weekends in large groups.

Evidently there are decent Greek restaurants around here, just not on every street corner. We have friends who claim there’s a great little dive type place near them, I need to ask about it again. And another friend took us to a place near his house that I went back to today while driving from one campus to another – Cyprus Grill over on Camelback. Tasty, it was – I’ll go back.

If only they did breakfast…I miss a good souvlaki and homefries breakfast with scrambled eggs doused in Tabasco.

While watching Gangs of New York (an entertaining film, even if it gets so much of the history wrong I want to openly weep (Bill Tweed says things like “I’m talking about civic duty; things we owe to the people…”? My a&%)…they don’t even get the squalor right – do an image search for New York tenements to get an idea. But I digress…

…I’m reminded of the fact that, despite much hand-wringing lately about the incivility in political rhetoric these days (supposedly almost entirely by Republicans and their Tea Party co-conspirators *ack ptooey*, if the MSM has it right *g*), politics hasn’t changed much in the last 225 years and if anything is less hate-filled and violent. To whit:

“…that you could as soon scrub the blackamoor white, as to change the principles of a professed Democrat; and that he will leave nothing unattempted to overturn the Government of this Country.” George Washington

Jefferson calls Adams a “…hideous hermaphroditical character, which has neither the force and firmness of a man, nor the gentleness and sensibility of a woman.”

Makes what we see these days seem kind of tame. But then, we also haven’t had a good to-the-death duel between a sitting Vice-President and a former Secretary of the Treasury or a sitting member of Congress beat another one half to death with a cane on the Senate floor in a good long time. Anyone who thinks today’s climate is worse than it has ever been simply isn’t well read in history.

So, I was wondering how many of the characters I could identify from that video I mentioned in my con post. Let’s see.

Sexy Alice from Through the Looking Glass? Nobody needs that – the Rev. Dodson’s view of the Liddle sisters was quite creepy enough, thankyewverymuch

Electra and Spiderman? I think

Dude dressed as Supergirl and Kailee from Firefly

Hell if I know – I was watching anime back when it wasn’t even called Japanimation and it was on early Saturday mornings. Battle of the Planets, Speed Racer, some samurai thing whose name I can’t recall (not Lone Wolf and Cub which was live-action). I swear, otaku-philes baffle me.

It was an interesting time for television. Morning TV could cover: The Rifleman, The Lone Ranger, Battle of the Planets, Looney Tunes (the old school politically incorrect versions), H.R Pufnstuf, The Banana Splits, Bowling for Dollars, Gumby and Pokey and Davey and Goliath (on the Commander Tom Show) ,Captain Kangaroo,  and Land of the Lost. I also saw  The Wonderful World of Disney Sunday nights,  the original airings of Space: 1999 and Battlestar Galactica. and a bunch of others that I can picture in my head but not pin down ATM.

I should have seen CSI: Miami coming when NYPD Blue aired and taken out a contract on Caruso back then. My bad.

I Don’t Go To Cons

I mean cons, the urban slang shorthand for fan convention.

But I get them. A sponsored, paid-for (except for your admission, parking, food, drink, merchandise, etc. – wait a second; how is this different from NASCAR, the NFL, country music, pop music, Oprah and the rest of pop culture? Never mind…) event where you can congregate with like-minded individuals  who like the same sub-culture you yourself enjoy. I take part in similar things, to a lesser extent.

However, since I don’t go to them I don’t know what characters most of these people are supposed to represent. And I don’t think of Alecia Moore as a musical act worth noticing.

w that if my daughter ever left the house dressed like this:

Edited to add: Yes, she’s very attractive. It makes me feel a little creepy to acknowledge that, since she’s probably young enough to be my daughter. I’m officially old.

Misanthropic? Me? Inconceivable.
Blog at WordPress.com.